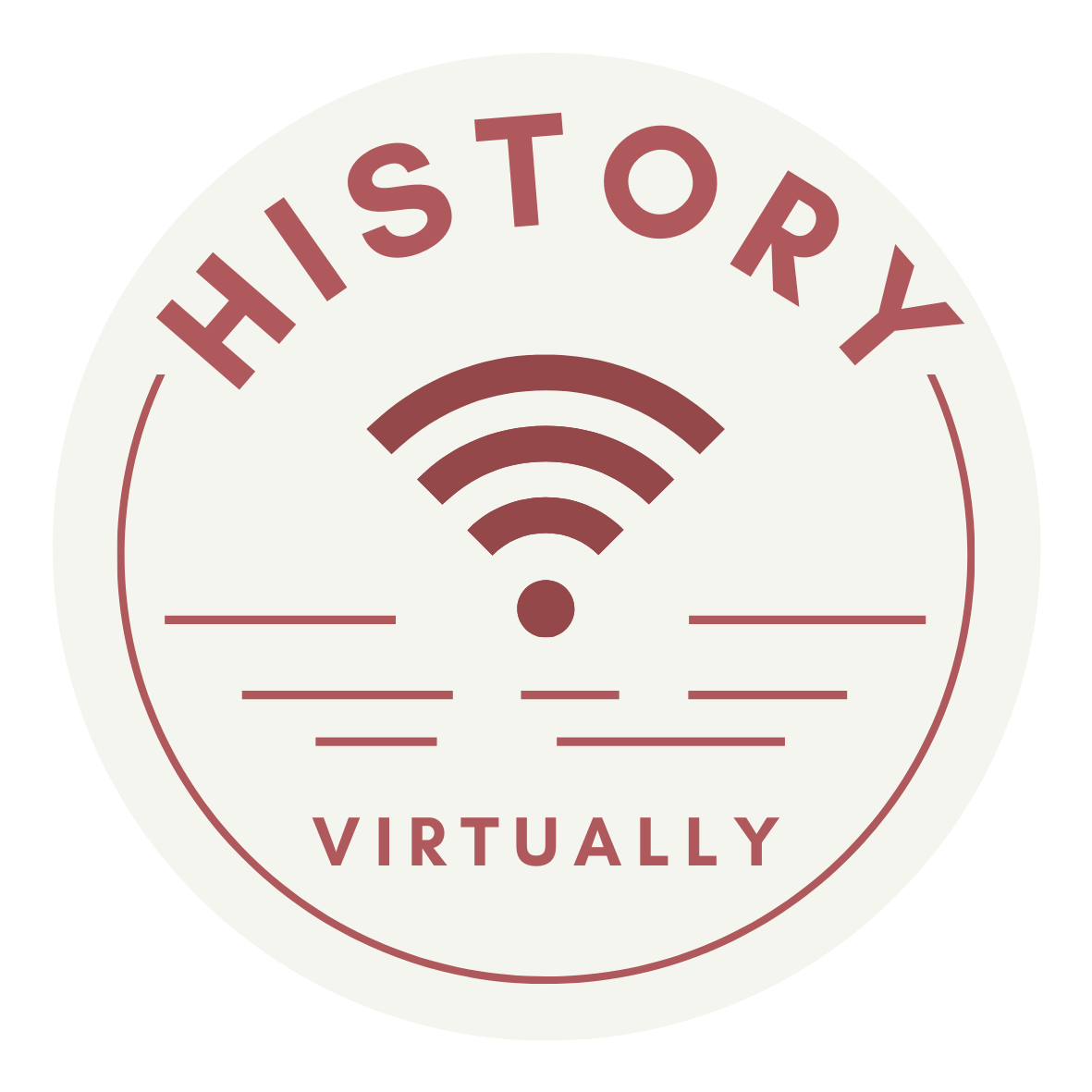 Interested in learning more of our History through our Virtual Lecture Series? Click the icon above for more information!

In making their way between the Manitou Passage and the Straits of Mackinac, vessel masters made a turn off the northern tip of the Leelanau Peninsula. Also serving as a marker for vessels turning into Grand Traverse Bay, the point thus served as an important navigational marker, and 1849 saw the first recommendation to erect a light on Cat’s Head Point in 1849.

Congress responded with an appropriation of $4,000 for building the new lighthouse on September 28, 1850. Construction began in the spring of 1852, and was completed late that year. Built on low ground close to the water’s edge, the station structures were likely typical of Great Lakes lighthouses during the period, consisting of a squat rubble stone tower outfitted with an array of Lewis lamps, and a simple detached keepers dwelling. David Moon was appointed as the station’s first keeper, and with his name appearing on district payroll records for the first time on September 7, it is likely that he exhibited the new light for the first time soon thereafter. However, it would appear that Moon was ill-suited for the rigors of lighthouse keeping, as he resigned from lighthouse service before his second season at the light, to be replaced by the indomitable Philo Beers on April 15, 1853. 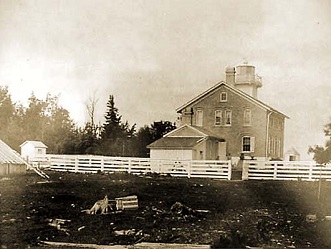 Beer’s previous service as a US Deputy appears to have come in handy, as the lighthouse was reportedly raided on a number of occasions by Mormon Pirates. Followers of James Jesse Strang, the self-proclaimed King of Beaver Island, these pirates were reputed to consider themselves above common law, and as such felt free to avail themselves of anything they needed by raiding from area “Gentiles,” as non-believers were known. On one occasion, it is reported that Beers managed to drive off a group of Mormons who attempted to remove the station’s Fresnel lens for installation on Beaver Island.

The old tower and dwelling were demolished in 1858, and work on a new structure began on higher ground on the point. Over that summer a dirt-floored cellar with rubble stone walls was excavated and a two-story ‘Cream City Brick’ keepers dwelling took shape. A short square wooden tower with white painted clapboard siding was integrally mounted at the center of the roof ridge, and both floors contained four rooms, with a centrally located entryway with stairs connecting the two floors. A narrower second set of stairs on the second floor led through the attic into the tower. The building featured first-class construction, with hardwood floors throughout and varnished wooden trim and wainscoting. Atop the tower, a cast iron lantern with copper sheathed roof contained a new fixed white Fifth Order Fresnel lens illuminated with a sperm oil fueled lamp. With its ventilator ball standing 48 feet above the structure’s foundation, the building’s location on high ground provided a focal plane of 103 feet, and a range of visibility of 12 miles in clear weather. 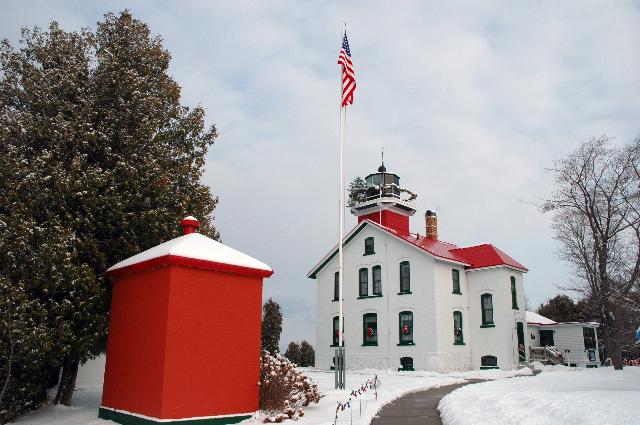 Life at the Grand Traverse Light station settled into a routine, with no mention of any repairs appearing in official documents until 1869, when the Eleventh District Inspector reported the station in good condition with the exception of some of the woodwork and doors, which had shrunk considerably as a result of the use of improperly seasoned lumber in their construction. A work crew arrived at the station the following year and effected the necessary repairs, and in testimonial to the increasingly important role played by the station, the District Lampist arrived to upgrade the lens to a larger fixed white lens of the Fourth Order. 1880 saw the erection of a wood shed, the pouring of a concrete floor in the cellar, and a complete repainting of the building.  Also, to provide housing for the keeper’s horse and feed, a two story barn 18 feet wide by 24 feet in length was erected.
c.1910, showcasing the brick oil storage building erected in 1896.

With increasing numbers of vessels rounding the point on their journey to and from the Straits, mariners became increasingly dependent on the Grand Traverse Light to mark the turn. With thick fogs frequently blanketing the area, the Lighthouse Board recommended that an appropriation of $5,500 be made to cover the costs of such an installation in its 1895 annual report, and Congress responded with the necessary appropriation on July 1, 1898. Plans and specifications for the structure were finalized over the winter, and contracts awarded for the construction materials and signal machinery on January 10, 1899. A work crew and materials were delivered at the station late that summer, and by November the brick building was complete and work turned to the installation of the fog signal plant. The boilers and machinery were moved into the building and plumbed to the ten-inch locomotive whistle which protruded from the lakeward end wall of the building. Work continued through the end of the year, with the signal officially placed into service on December 20. 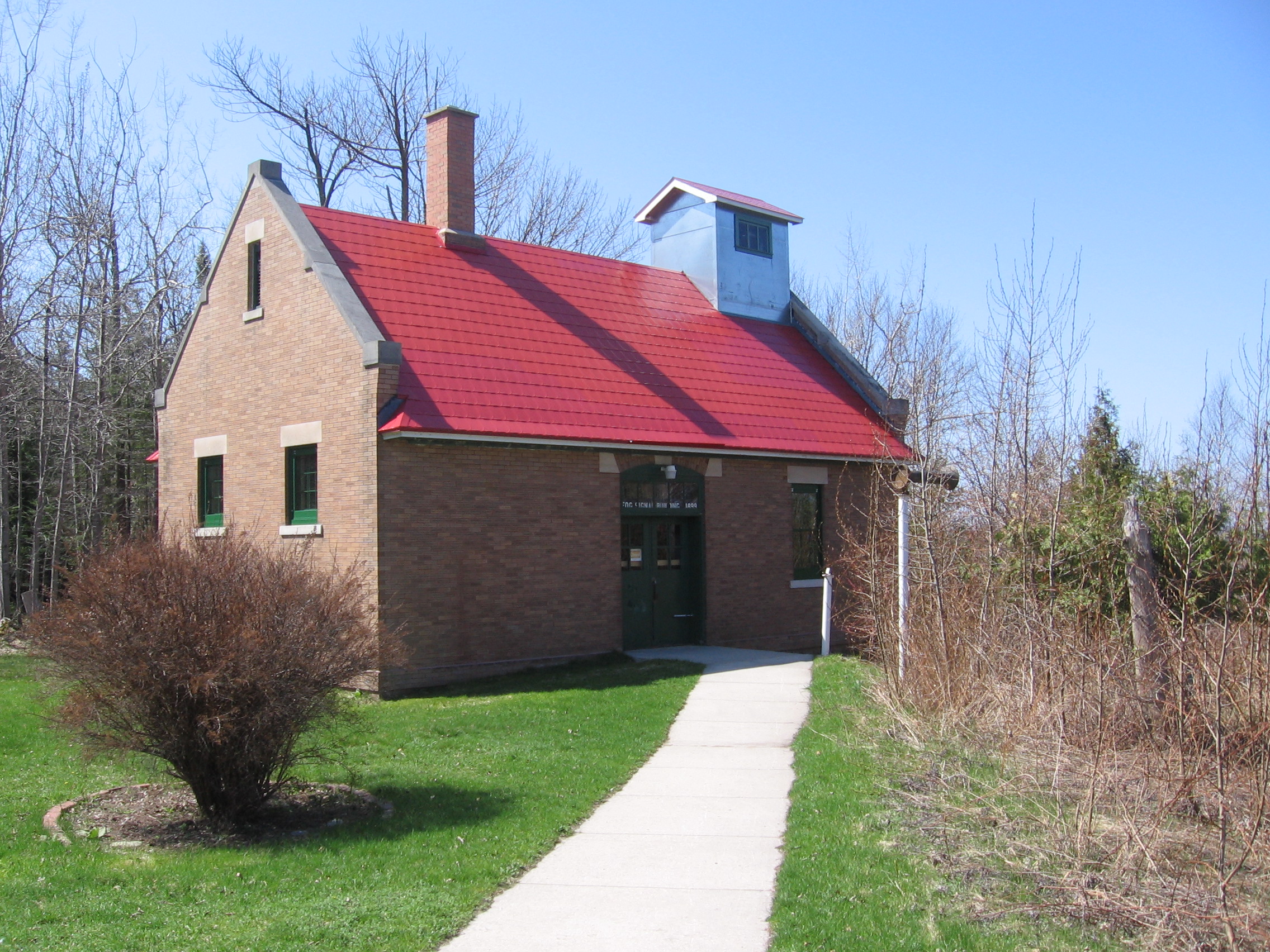 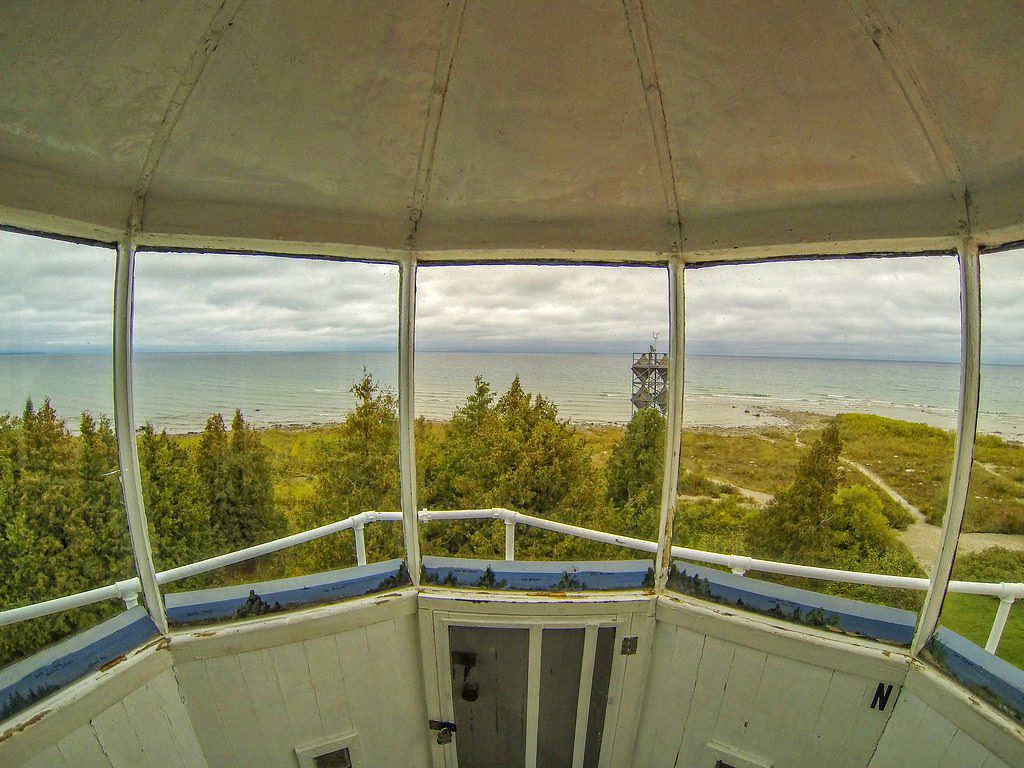 Inside the lantern room, by Selector John Photography

With the establishment of the fog signal, it was determined that the workload at Grand Traverse would be more than a single keeper could handle, and the decision was made to add a First Assistant Keeper at the station. However, with the main lighthouse building being designed for a single family, additional accommodations were needed. Thus, in 1901 the dwelling was significantly enlarged and remodeled to convert the dwelling into a duplex with accommodations for two families.

1904 was likely a memorable years for the Grand Traverse keepers, as they split and loaded 49 cords of wood into the boilers in order to keep the ten-inch whistle screaming for a station record 318 hours.

The Lighthouse and Fog Signal Building stood vacant after closing, until 1985 when a local group organized the Grand Traverse Lighthouse Foundation (that’s us!) with a goal of preserving the historic buildings and creating an interesting and educational “living lighthouse” for the public to enjoy. After two years of renovation, the Lighthouse Foundation reopened the station as a museum on Memorial Day in 1987. 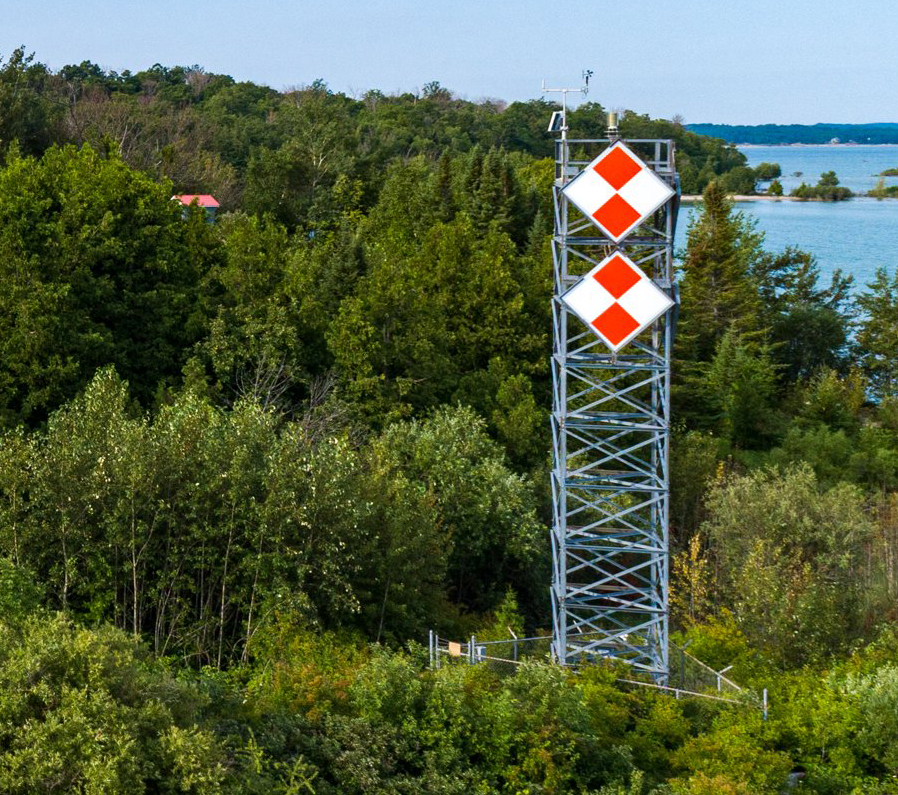 Steel tower beacon which replaced the light in 1972

Become a member of the Grand Traverse Lighthouse Museum and receive benefits such as free admission to the museum (for members and their guests), discounts in the Lighthouse Gift & Camp Store, a quarterly newsletter, and more.